Following an ARCON led Master Facility Planning process, and pre-referendum effort that led to a 74% YES vote, SD 60 embarked on a significant addition and renovation project at their 6-8 Middle School. Originally envisioned as a modernization “in-place” of several program spaces, the Master Facility Planning process uncovered significant zoning issues within the building that were hindering the building’s support of learning and current education practices. Circulation issues, travel times, and a cafeteria/performance space open to the hallways were each a source of high student and teacher stress. Projects resulting from the MFP process looked to resolve these issues and provide expansion and much needed modernization to spaces for the elective programs.

The existing science suite was located remote from the grade level wings and included insufficient quantity and quality of spaces. While supporting science teacher collaboration, the remote location contributed to travel time anxiety for the students, a stress generator. As part of the solution, a science wing addition was placed in between the grade level wings with easy access from each grade. Each room has access to outdoor learning opportunities both directly from the classroom and across a new science teaming hall to an enclosed science courtyard. The science hall is enlarged and outfitted with utilities to allow for team teaching and extended project set-up. The new wing increases circulation options which, reduce travel times and circulation stresses, and helps minimize classes passing through one another in route to science or electives.

Vacated former science spaces provided the opportunity to rezone, expand, and provide much needed modernization to music, band, STEM, FACS, and art programs. Sixth grade classrooms were expanded and modernized from their open concept to enclosed classrooms, no longer open to, and negotiating with, the adjacent library. The library received a re-planning and modernization with flexible furniture. The most impactful modernization happened to the cafeteria/performance space, transforming it from a loud, poor performing, open space to an enclosed, re-oriented cafetorium, outfitted with appropriate amenities to support both a relaxing lunch experience, as well as performances. 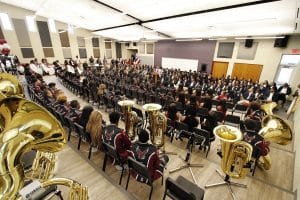 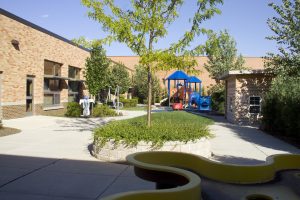 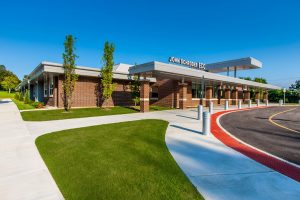